Phloral Phantasm and Sun And Shadow

Phloral Phantasm and Sun and Shadow have been accepted into the "Blank Canvas" show at the new Arts HQ gallery in Surprise, Az.

This is Phloral Phantasm, a digital print on silk, of a painting I did a number of years ago. I overpainted almost the entire piece of silk. The original painting was too pastel for my liking...
I deepened all the colors with acrylic paint and textile medium which did not affect the "hand" of the fabric. I still needed to bury my threads. I used red thread on the back and changed the threads on the front to match the colors of the design. I experienced some "tension issues" with the front thread showing here and there on the back. Better there than on the front. 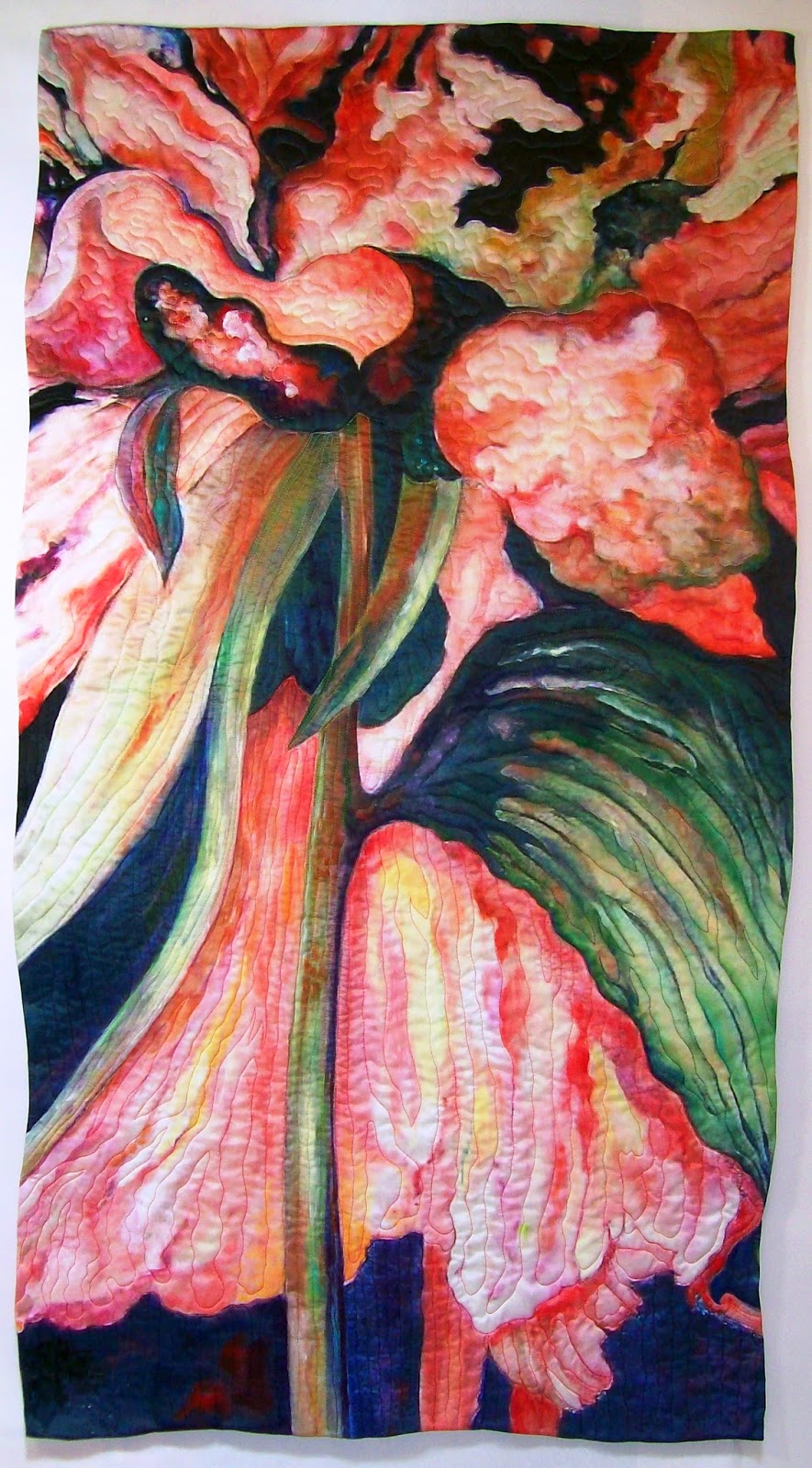 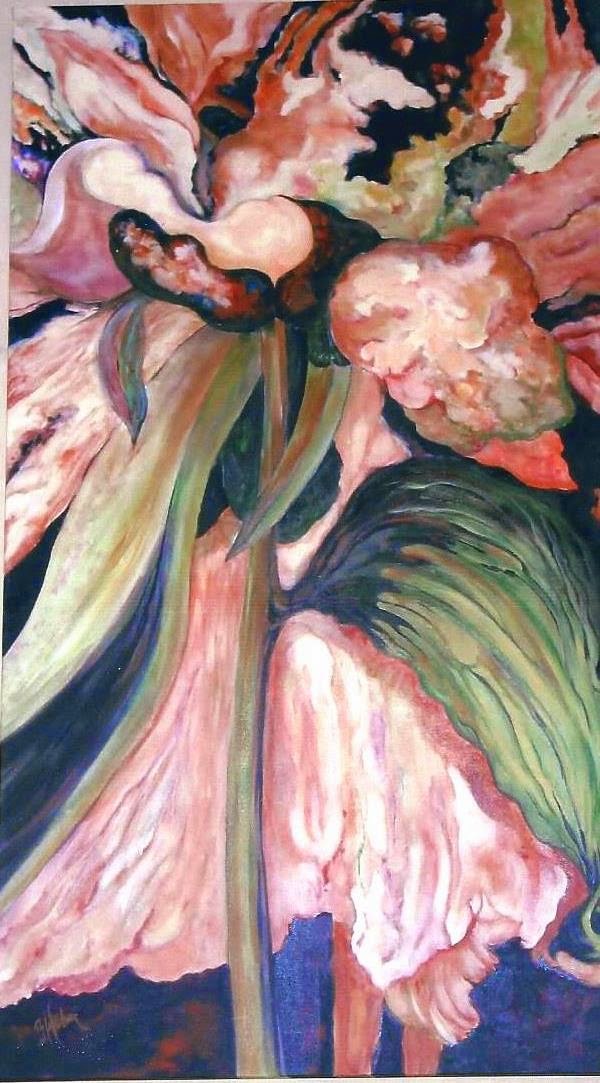 The photo on the right is the original painting that I had digitally printed on silk.


The needle disturbed the surface of the silk so I used a fabric pen and "tickled" some color in next to the thread where the surface was showing light on the dark areas. A fabric pen in the same color as the background fixed it up.

The thread tails on the back needed to be buried. This is how I do it.  I use an easy threading needle made by John James. It has a notch on the end into which I thread both short tail ends. You just put the needle into the fabric right at the point where the tails come out: 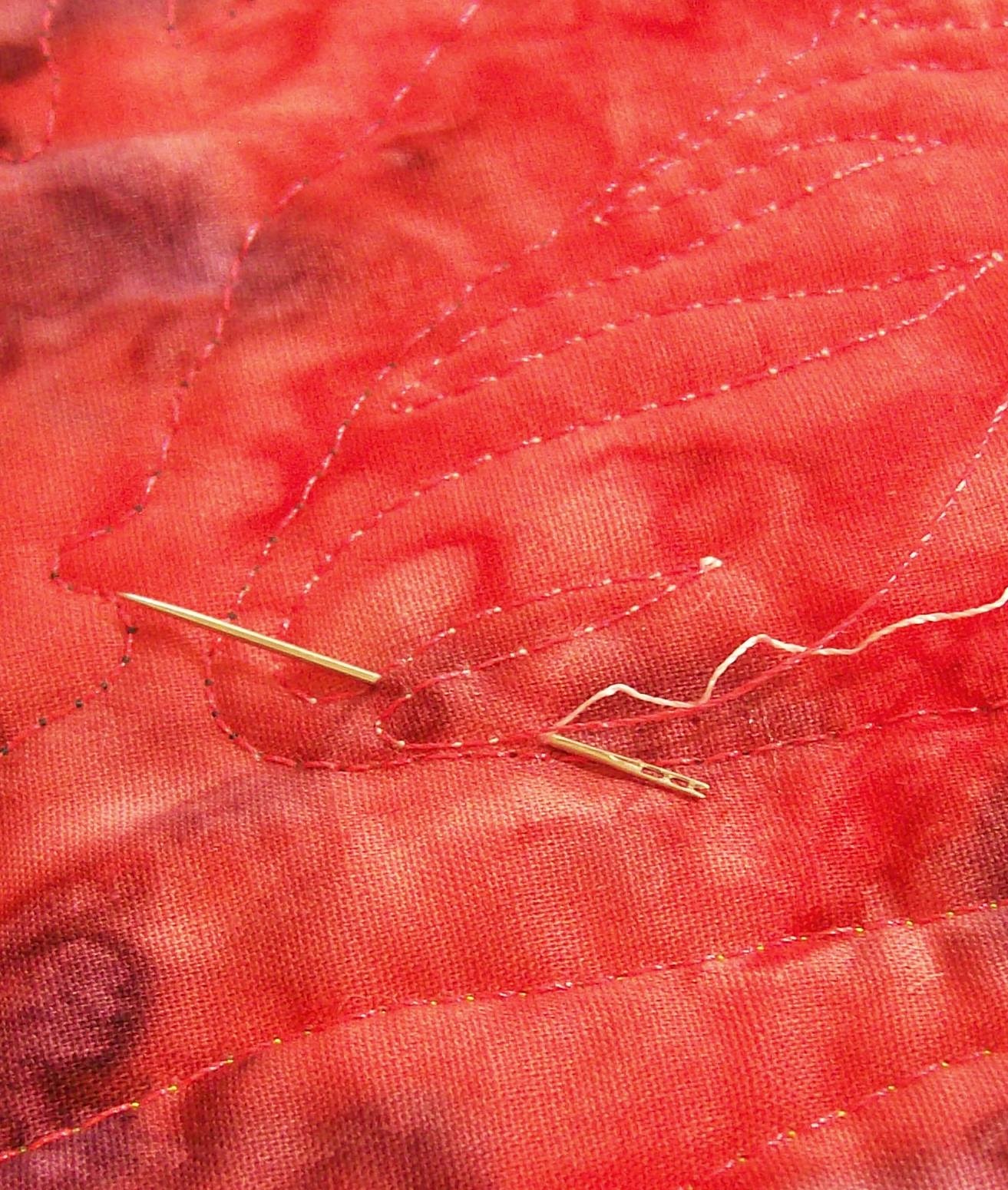 Then you pull the threads into the slot in the end: 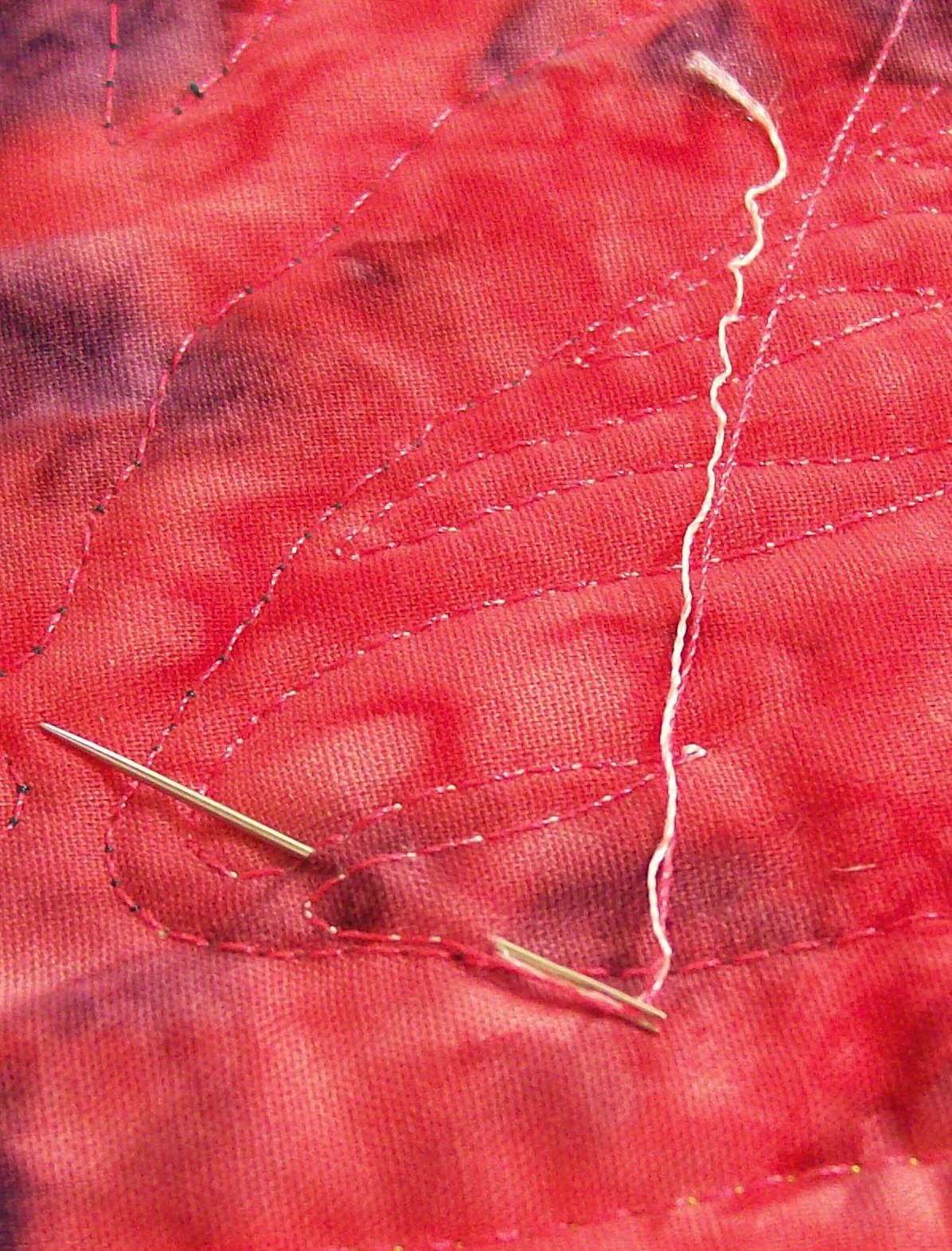 Then you pull the threads thru and trim them off. I usually aim my needle at an area of stitches so that the thread is "locked" in. 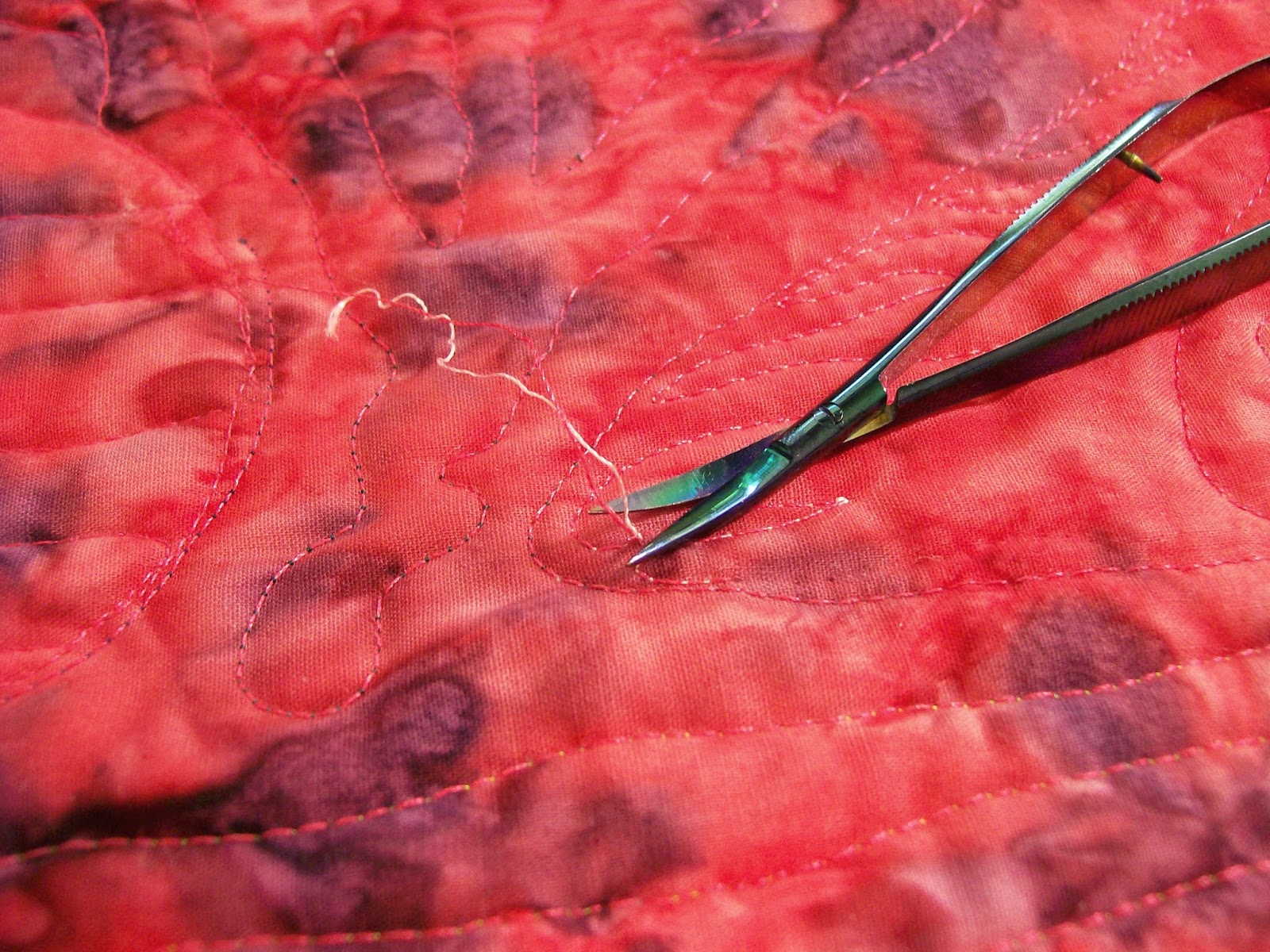 I snip with my favorite everything scissor...and EZ cut scissor that has a curved tip and you squeeze instead of putting fingers in the holes. It sits on top of my sewing machine, next to my iron and about 8 other convenient places.   :)

The other quilt that is going off to the show is Sun And Shadow. There are two lizards playing on the surface in the swirling leaves and in the shadow of a tree. This was a project I called Jigsaw puzzle piecing.

After I fused the pieces down on 8 identical large blocks, the blocks were rotated in two different ways to create two different pinwheels. The pinwheels symbolize the dust devil winds that play with our leaves here in the southwest.  I then laid organza in large pieces down onto the surface and free motion quilted a design that could be trimmed as reverse applique.

I had made 9 blocks so I used the ninth block to cut out two lizards that would "hide" on the portion of the block that created camoflage. One light one named Sol and a dark one named Sombre were the result. The only machine piecing in this quilt is the sashing and border and enveloping the quilt. (no binding necessary). It's made like a pillow. Leave an opening and hand sew it closed. I make my opening under the sleeve and close it with fusible web.

At the end I added organza leaves that are two layers of organza fused together and stitched with a vein. I am going to add some paint to strengthen the composition. I will post that in a couple days so you can see the difference. 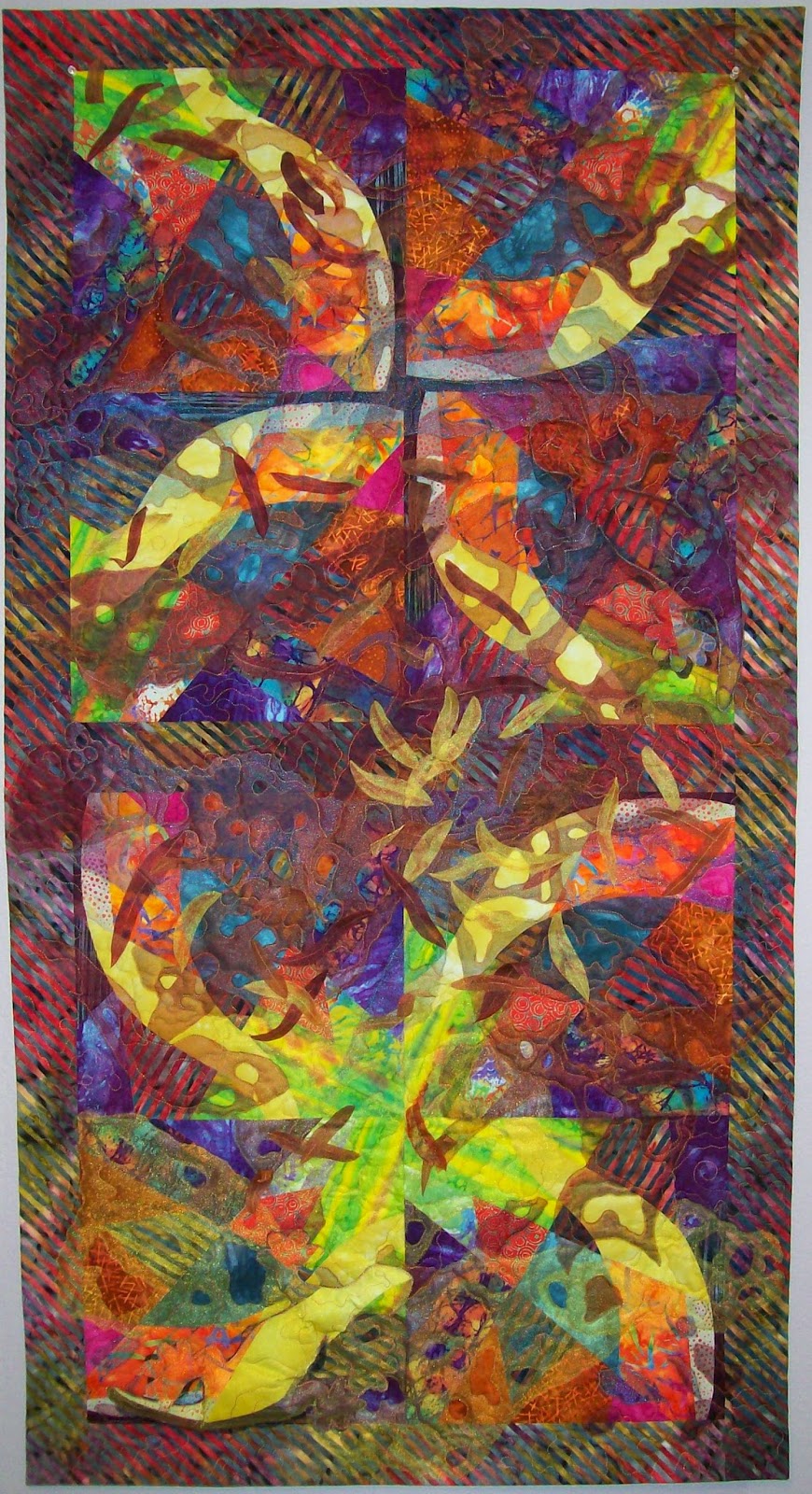 The lizards are in the second block down on the right (shadow) and the bottom left block (sun).

Here are the lizards: 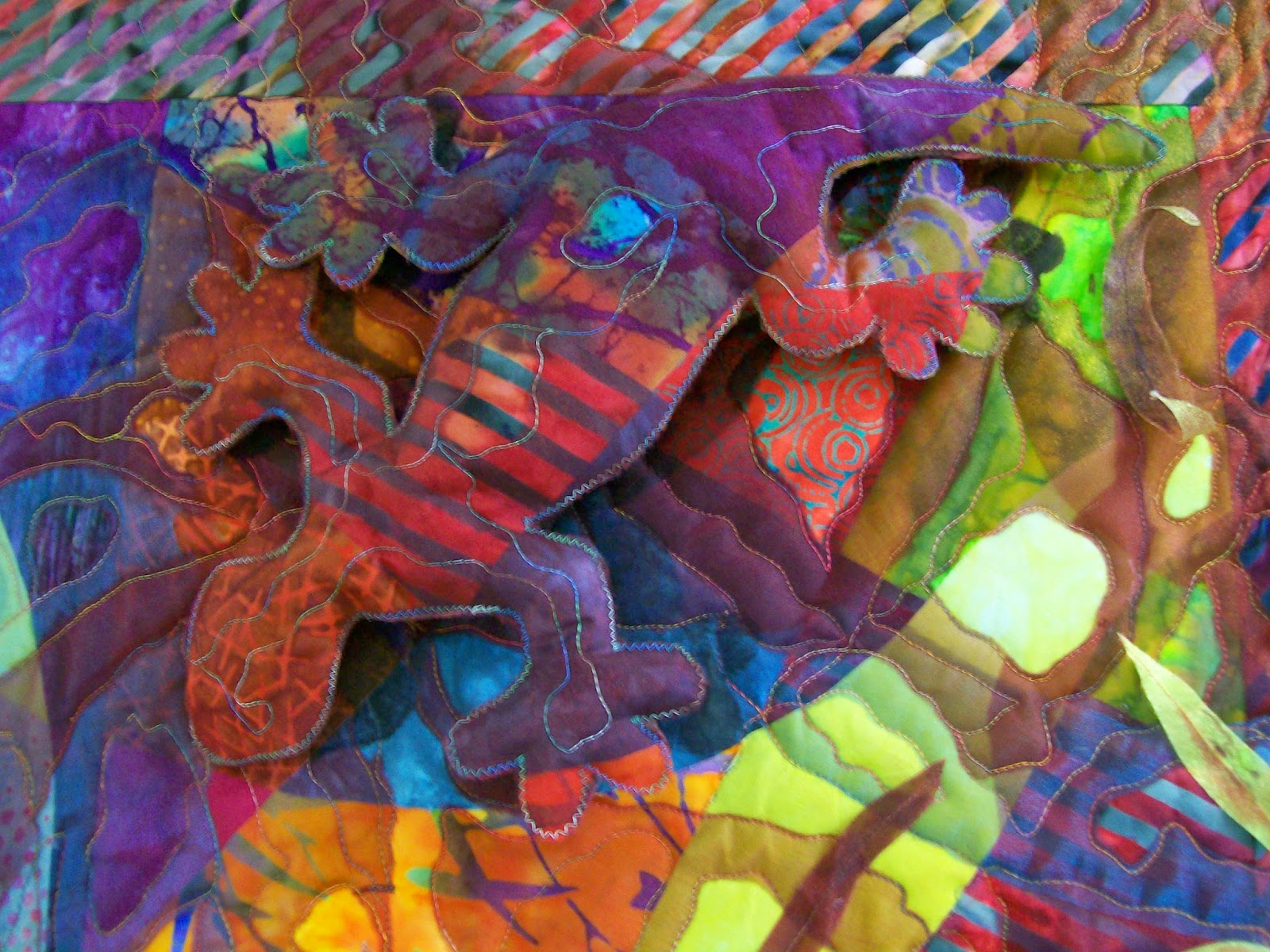 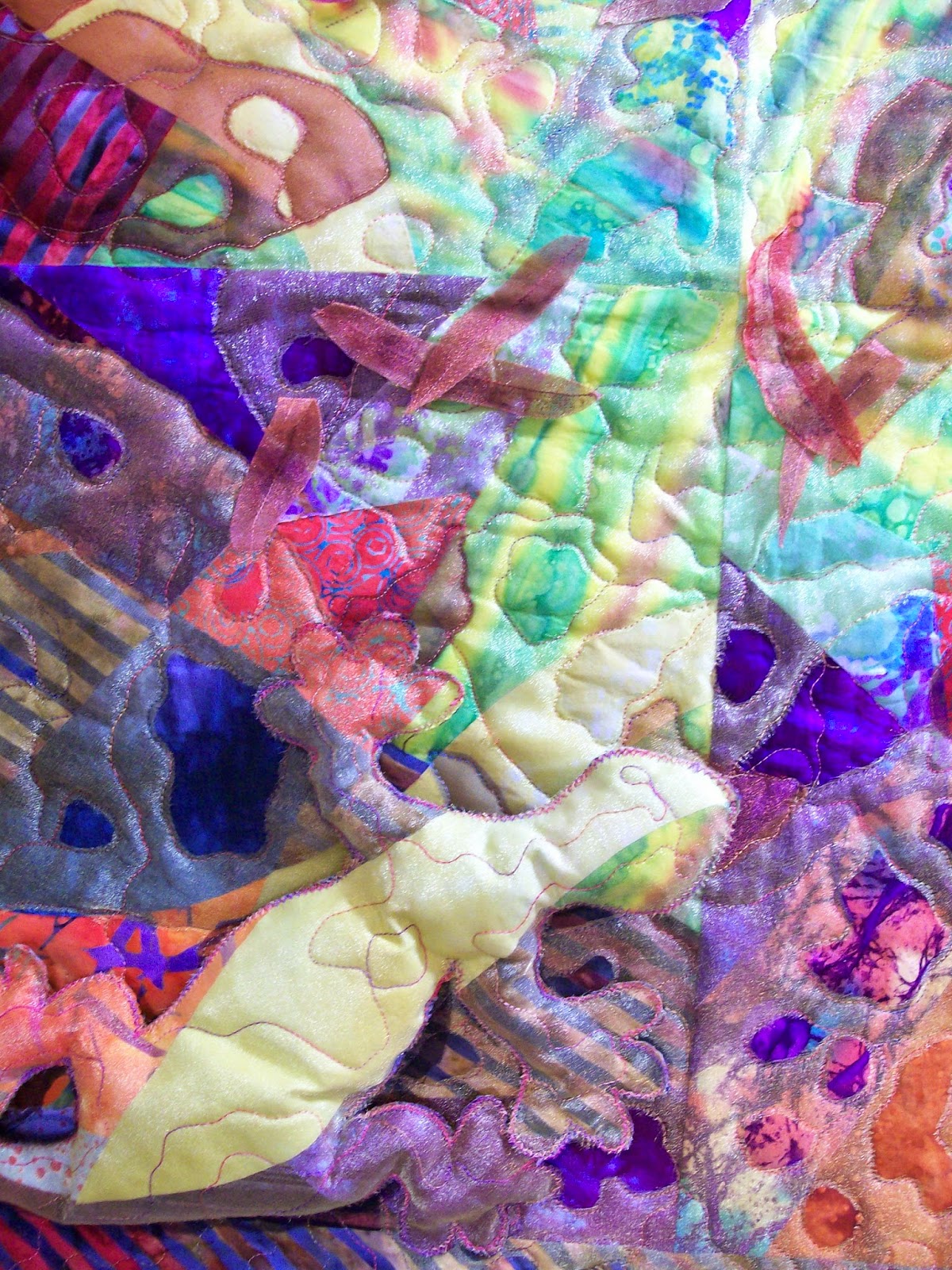 Well, enough for now. Back to doing the facings on Phloral Phantasm. I will show you how I do it in a later post...

Happily quilting and teaching....
Posted by Betty Hahn at 4:32 PM